“I was so much older then, I’m younger than that now.” – Bob Dylan

I was looking through an old college sketchbook recently and found a diagram relating the overarching concept of a studio project I worked on in Montreal for a Mediatheque.The sketch showed a detail of a column, a typical bay, and the shape of the building all drawn the same size and adjacent to each other.Above it, written in my fit for a doctors’ scrawl was the heroic phrase: TOTALITY OF BUILDING. I remember one studio session with my professor for this project way before this sketch. My preliminary ideas for the building had massed the program into two distinctive volumes, which I deemed an articulation of program.However, I espoused my admiration for Mies, and the concept of a building having a consistent disciplined theme throughout.I noticed my professor seemed a little perturbed by these remarks.He looked at me, then the sketch, and slammed his fist gently on the table and said; “If you are going to do this, do it damn it!Don’t half ass it, go all the way.Make a disciplined building.” This declaration refocused and distilled my ideas about the project further.So, I attempted to distill a Mediatheque with an extremely elaborate program, and concocted a rational bay system and grid (with classical proportioning) to accommodate all the necessary functions.This took an endless amount of time. I still believe the simplest looking buildings are the hardest to pull off.

Looking at this approach to design, I realize in hindsight the inherent hypocrisy of my design ideals.I spouted off endlessly about my hatred for form, and my patent disassociation with Frank Gehry and the form makers.I aligned myself with the classic Modernists, who were interested in light and volume, and rationality based on technology and program to create a building.The focus was not on aesthetics, but the root of the building, the truth of the program: Honesty in architecture!However, is getting program to fit into a glass cube any different than getting program to fit into the likeness of a horse’s skull?The emphasis may be different, but the approach is the same: make a building’s nature bend to the will of the aesthetic framework.

So in hindsight, I need to acknowledge that the Mediatheque had an aesthetic framework that expressed rationality and honesty, but in and of itself was not necessarily honest.I lied to tell the truth about my belief in an architecture of consistent wholeness. To express clarity one must suppress the endless complexities of design.

One could argue that my proposal for the mediatheque, was rational in the sense that regularity was more economically feasible.If economics drove the building, mine would potentially be a more rationalist solution. We did not work with a budget for this project, however, so this factor did not influence my design. 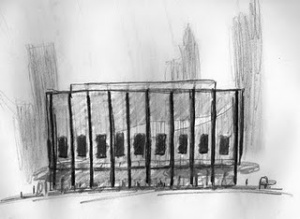 To be kind to this old project, I think I pulled off a successful building that distilled my ideas further than they had ever reached before.I still have a defense and a belief against the form makers, and the strict Spiritualists, (A glass cube and horses skull ARE different) but I’ll save that for another time…