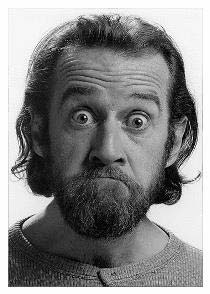 George Carlin has a hilarious standup routine where he takes the Ten Commandments and distills them into two. It got me thinking about the holy trinity of architecture by Vitruvius: commodity, firmness and delight. Now, really when you think about it, commodity and firmness basically speak of the same thing. They are both dealing with pragmatic concerns. Commodity includes the logical development of program, economy, and integrated systems within the building. Firmness deals with the structural soundness of the building. These are both logical and necessary concerns. A truly successful building should operate efficiently, economically and structurally. So in the tradition of George Carlin I propose we combine these two rules into the all encompassing word of Commodity. Commodity is a much broader word than firmness. It’s a definition that can successfully imply structural integrity.

Delight speaks of the aesthetic will of the architect. It talks of the more intangible practice of creating beauty. Delight is the effort by the architect to integrate all the pragmatic concerns into a visual language that has rhythm and harmony. This is elusive, indefinable, and (removed of context) seemingly arbitrary. Therefore the rule known as Delight could not possibly be combined with Commodity because they do not share similar motivations. 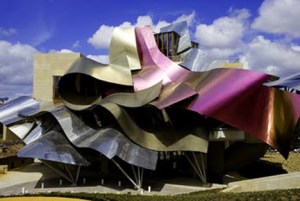 Too much Delight? Frank Gehry. 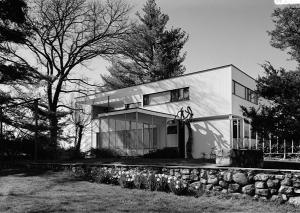 The impossibility of artistic bias. Walter Gropius House.
Some of the so called Functionalists of the early twentieth century would argue that a building created in perfect commodity would be by it’s very nature delightful. They would say that aesthetic concerns are outcroppings of logical building. If a true pragmatic functionalist were writing this article right now he/she could go further than me. He or she could pair down the Vitruvian triad to only one rule: Commodity. I love the functionalist ideology, and I believe in it as well, but I also acknowledge that it is next to impossible to be completely impartial when designing a building. The aesthetic will of the architect will present itself no matter how hard one tries to repress it. What is fascinating about the Functionalists is that their aesthetic vocabulary (which they think they didn’t have) is actually a creation of functionalist symbolism. Only in hindsight do visual cues begin to emerge in these harsh buildings that attempt to be free of rhetoric and artistic will. Still, I think it is a noble direction to strive in. I believe in the power and posterity of the universal over the individual. 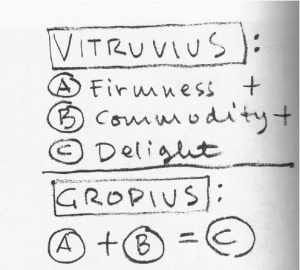 Robert Venturi’s diagram of the Functionalist Vitruvian method. (From Learning from Las Vegas).

So, discounting the Functionalists, there are two basic tenets of architecture; Commodity and Delight. The architect must walk a tightrope between aesthetic and pragmatic concerns. This is the dual nature of the architect. By our very nature we are conflicted individuals. We are unsatisfied with total logic. We are unsatisfied with the complete freedom awarded to the fine artist. We are hypocrites towards our own desires. Long live the dual natured architect!

Now for some comedy: http://www.youtube.com/watch?v=YzEs2nj7iZM

2 Responses to Commodity and Delight.