The Front and the Back: Mies,The Reichsbank, and the Crisis of Monumentality

Figure 1. The Reichsbank “back.”

The Reichsbank project of 1933 (fig. 1) is an attempt by Mies Van Der Rohe to synthesize both monumental and modernist rhetoric. This competition, during the first year of the Third Reich’s power, attempts to resolve and enfold both pragmatic and political schemas. There is both a monumental classicist front façade (fig. 2) where one enters the public bank, and a functionalist modernist office façade on the backside (towards the Spree Canal). The front has classical hierarchy: entrance in the center, imposing facade proportions, and overall symmetry. The elevation resembles the hierarchical insistence and imposing frontality of the Palazzo Farnese (Fig. 3) On the backside symmetry is replaced by non-hierarchical seriality. Instead of the grand Schinkelesque front entry facade one reads the insistent wrap-around ribbon windows. These express the repetitive function of office work. The spacing of the bar buildings correspond to daylighting needs, while the ribbon windows are a throwback to both the Concrete Office Building project of 1923, and Mendelsohn’s Schocken Department Store in Chemitz of 1929 (fig 4, 5). A former employee of Mies, Sergius Ruegenberg, recalls Mies inquiring from Mendelsohn the window proportions of the Schocken store during the Reichsbank competition.1 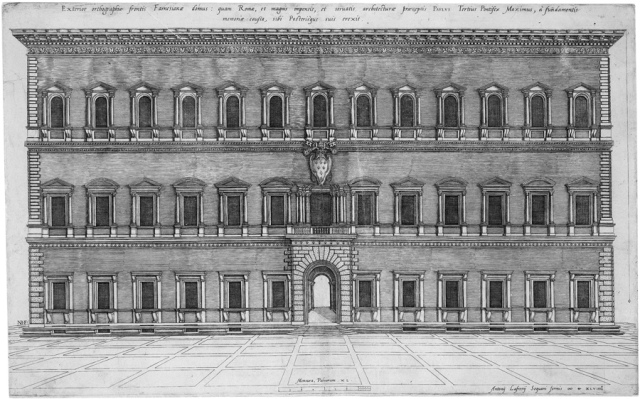 In effect, the Reichsbank Project attempts to reconcile the civic agenda of the new Reich and Mies’ agenda to advance modernism by creating a classical and a modernist façade (one could argue that the side facades are a transition between these two, but I won’t go into that just yet). However, upon further study, there isn’t a clear separation between the two potentially discordant rhetorical approaches. The modern infects the monumental front façade as the ribbon windows wrap around the upper levels (fig. 2). The symmetrically located clerestory windows undermine the heavy rootedness of the large blocks of brick that bookend the grand window of the large banking hall lobby. Thus, the imposing monumental heaviness of the opaque wall surface is literally undercut by the subtractive clerestories. Brick and glass (not stone) subverts the tectonic expectations of monumentalist architecture, particularly when considering Speer’s later meditations on Ruin Value.2 To the Fascists a brick and glass façade on a civic building would look unfinished.

At the back façade, the threat of infection by the serialized bar buildings suggests a possible alternative monumentality: one that reflects the Regimes goal of permanence conquest and control, but without the expected tectonic or classical motifs. 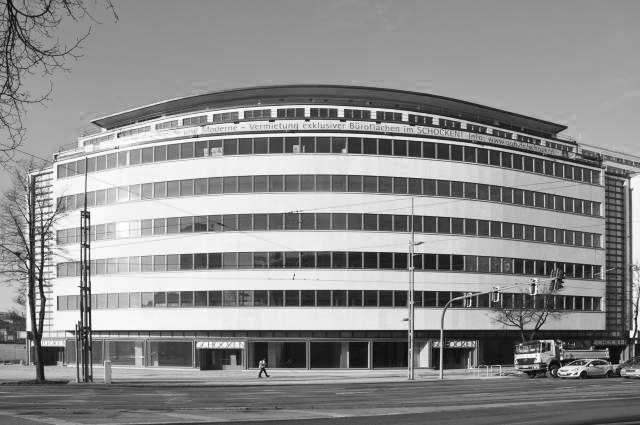 At this early stage in the Nazi Germany the groundwork for an architectural rhetoric was not yet fully established (the competition was actually begun before the Nazis took power), which explains why several modernists such as Mies, Gropius, and Taut participated. Soon Mies would discover that his brand of modernism was not deemed appropriate for Nazi civic architecture. Modernism was synonymous with functionalism and economy, with temporary factory buildings that did not need to propagandize the imposing presence of the National Socialist movement: in short, the Nazis needed an architecture that subjugated and dwarfed the individual, and the tenets of Modernism could not meet these requirements.

Did Mies’ mixture of modernist and monumentalist expression propose an alternate path for the rhetorically liberating effects of modernism to enfold into the totalitarian project of the new regime? Was it, conversely, a subtle critique or expression of frustration at the incongruity of a modernist and Fascist union?

This reminds me of the somewhat later villas of Hans Scharoun, particularly the Baensch House of 1935 built during the Nazi Regime.3 (fig. 6,7) For political reasons Scharoun was obligated to express a traditional vernacular on the front facade, but on the backside – where supposedly the government wasn’t looking – Scharoun broke open the façade with sheets of glass maintaining a truly modernist relationship between inside and outside. Just as in the Reichsbank, there is a well-behaved closed front, and a liberated open backside that serves the real needs of the occupants – untethered by political rhetoric or control. 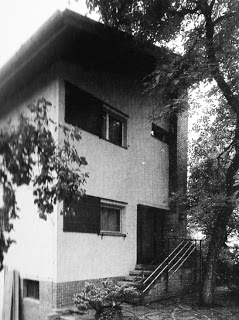 Further back in time this recalls the Winslow House of 1894 by Frank Lloyd Wright (fig.8,9). Although stripped down and un-Victorian by the standards of the day, the front façade looks ordered, symmetrical, and carefully proportioned, while on the backside there is a certain geometrical and non-hierarchical playfulness. These two approaches to the facades have less to do with hiding or reconciling a political agenda. Instead, the “wild” façade is hidden purely for decorum. The shock of the new would have been too much for the average citizen walking down the street to handle. Frank Lloyd Wright would have to wait a bit longer to unleash his fully formed prairie style. Both of these examples demonstrate the challenges of architectural conception, particularly when there are competing agendas. 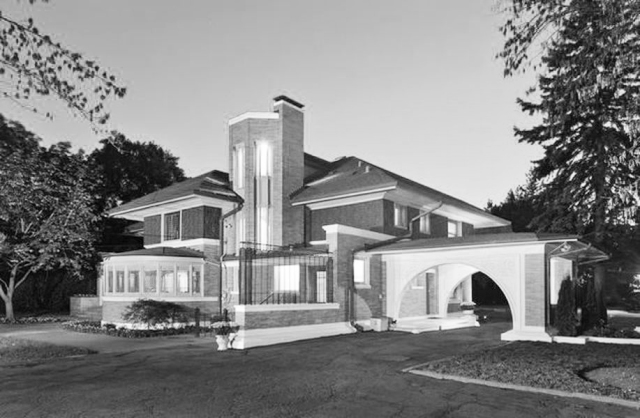 Figure 9: Winslow House Back side.

In short, it is difficult to read the Reichsbank as a clearly monumentalist classical building or as a purely lightweight modernist one. The motivations that led Mies to this final direction remain ambiguous and conflicted. When a modernist is expected to advance a new agenda that is in most ways antithetical and malevolent to the modernist project a tension arises. This irresolution leads to an ambiguity of intentions on Mies’ part: Either the building was a compromise towards monumentality, in order to stay employed as an architect in Germany under a new regime, or it was a way forward that suggested a synthesis between the monumental and the modern. Both of these options would be considered a failure, not only because Mies lost the competition and failed to show the Nazis an alternative to neoclassical bombast, but because he did not resolve the antipodal philosophies. If neither of these is the true motivation perhaps the duality between modern and monumental remained intentionally unresolved, possibly as a stubborn yet subtle critique of the capricious Reich. Detlef Mertins perceives this trepidation within the menacing shadows of the final project charcoal renderings (fig. 10):

“Perhaps Mies did seek to express the character of the new National Socialist state: not the character conveyed by its propaganda but rather its true character – soulless, empty and inhuman.”4

2. “This idea of buildings or stones as capable of speaking, and doing so

across time, was shared by Speer, who drew up what he called a ‘Theory

how buildings from Classical Antiquity had decayed over time yet

centuries. His theory thus aimed to take into account the ways in which

tradition’ (Speer, 1995). That is, that they would retain sufficient of their

shape and qualities even as they fell into ruin to remain able to ‘speak’.

Not only, then, was there an intention that the structures as built would

be capable of effects, calculations were made about how agency might

be made to continue into the distant future.”

From, Macdonald, Sharon. Words In Stone?: Agency and Identity in a Nazi Landscape.

3. See my earlier post for further insight on these 2 projects: https://thelyingtruthofarchitecture.wordpress.com/2010/02/03/mullet-architecture-fllw-and-hans-scharoun/Page 216.